is a project of : 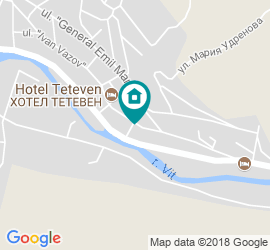 Advantages
Wi-fi in the rooms Free parking in hotel Wi-fi available in public areas and free of charge. Air condition
All ExteriorInteriorCountryside

The newly opened family hotel "Teteven" is situated at 415 meters above sea level along the two banks of the Beli Vit river and is situated 115 km away from Sofia. The hotel offers coziness and ambience while being in the center of the city, with access to all communication and tourist services.
It has 12 rooms and 4 studios furnished in a classic style. Equipped with cable TV, internet and a safe. The bathrooms have a bath or shower cabin, a hairdryer and an alarm system in case of an accident.
The restaurant of the hotel has 80 seats and a summer garden, which offers its unique atmosphere for business or family dinner as well as for private parties, celebrations and seminars. The menu includes various specialties from Bulgarian and European cuisine.
There is a swimming pool close to the hotel, which is completely free of charge for hotel guests.

Sightseeing in the area:

Glozhene monastery
One of the most interesting and picturesque monasteries in Stara Planina is the Glozian "St. Martyr George the Victorious". It is not among the great Bulgarian monasteries and unlike the others it is not hidden in the bosom of mountain ranges. The castle of God is perched on a high stone terrace separated from the environment by steep slopes and sheer rocks. The monastery is 870 meters above sea level. Situated on the eastern slope of the Liszt mountain ridge of the western Forebalkan, below the Kamen Lieset peak, 1,095 meters high, and 3 km southwest of the village of Glozhene. The monastery's brotherhood consists of a church and residential buildings. The latter made a courtyard enclosed around the church, which, like the three-sided vertical rocks, gave him the picturesque and inaccessible look of a monastery-castle.
According to the legend, one day the walls of the monastery began to crumble in an inexplicable way and the miraculous icon disappeared again. They could not find her for a long time. Soon the icon of God's inspiration was found on the branches of a barren tree on the eastern end of the high and inaccessible rock below the Kamen deserts peak. They were glad to find it, the residents returned the icon to its place in the church located in the fortress "Gradishteto - Kulata". The next day, with anxiety, they realized the icon was gone. After many new days, she finds her on the branches of the same wood. And so, three times, the strange icon of St. George appeared. Now it is stored in the Cathedral of Lovech, and there is a copy of it in the church.
The monastery was frequently visited by Vasil Levski. There is still his hiding place here. This tunnel dates back to the 13th century. It was then made to connect this monastery with the other one, which was below the monastery rock. This tunnel is also combined with caves, but at present the tunnel is covered and only a room with a depth of about 3 meters. Later this hole became the hiding place of the Apostle Vasil Levski. His monastery was the center of action. Nearby is the village of Golyam izvor, where was founded the first revolutionary committee. The deacon here came to the then abbot of Glojen Monastery Hadji Evtimii Simeonov, with whom he was friends from Sopot. The Glozhene monastery was declared a monument of culture.

The Chapel in Teteven
On July 20, the historic Teteven monastery gathered a huge crowd of people at its temple feast. St. pro. Elijah is traditionally very talkative in the beautiful Stara Planina town. The Tetevens loved the saints and worshiped him, and many sermons and vows were condemned to him. They are glad that their ancient monastery, picturesquely situated on a hill over the city, bears the name of this great Old Testament prophet.

Waterfall "Skoka"
The eco-path starts from the central town of Teteven. From there the tourist has the opportunity to walk all the way by passing through one of the districts of Teteven "Koznitsa" or to use somewhere in the vehicle and then to walk the last 600 m of the eco path, walking on the exceptionally picturesque gorge of the Koznitsa River. At the very end of this small canyon is the waterfall "Skoka". It is located on the left side of the trail and is 15 m tall and on the right there is another waterfall, about 50 m tall, but unstable. To get to the beginning of the eco-path: just across the central square of Teteven there is a bridge over the river, it is on it (cross the left side of the city market.) Continue straight on the road that slightly turns left and passes through a small bridge. Just after the bridge turns to the right, there is the beginning of the eco-path itself, going up the asphalt road to reach the information sign.

Saeva hole
The cave impresses with its numerous halls and galleries with incredible acoustics. The bizarre rock formations - stalactites, stalagmites and stalactones - will undoubtedly bring delight to the eye of every visitor.

The Blood Well
The Historic Site

Availability for your search

If you have other questions to the hotel concerning the rules, you can send a message here