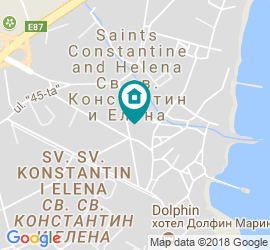 There is a place at the Bulgarian Black Sea coast, which has preserved its nature, quietness and serenity. The unique combination of forest and sea on this place brought over some priests in the past and prompted them to build the monastery of Sts. Constantine and Elena. Nowadays, in the immediate proximity of this holy land are located the hotels Estreya Palace and Estreya Residence.

As part of the buildings belonging to the monastery, in the early 20th century, the first grape-based medical treatment facilities were established – hotel St. Constantine, which gave the start to Bulgarian Black Sea resort tourism. The dynamics of the historic times as well as the political events have had their impact on the appearance and the name of that building: until 1957 it was known under the name of hotel St. Constantine, from 1957 until 2003 under the name of hotel Prague, and since 2004 it has been reconstructed and renamed into hotel Estreya Palace.

Nowadays, the old-time tradition of grape-based medical treatment is reviving in the SPA-centre Estreya. With the wine-based therapies and procedures, which are unique for the Bulgarian Black Sea coast, there are grapes and products used from the Belogradets vineyards.

The appearance of the resort was changed with the construction of hotel Estreya Residence. Preserving the natural surroundings, cosiness and specific Bulgarian architectural style, the hotel offers its guests a spacious lobby, a modern-equipped hall for parties and conferences, while in the basement there is the SPA-centre Estreya.

The combination of a lovely forest and the proximity to the quiet beach in the resort provide conditions for an unforgettable vacation and a positive mood.